Brushing away the cobwebs.

Forgive me father, for it has been over two and a half year's since my last Grymn related post...

Sadly, there hasn't been anything new in the way of Grymn for all this time... and we are still awaiting the completion and release of the more boxy Grymn troopers... but that doesn't mean that the lure of the Grymn has left me far behind.

This week, I decided to get some painting done... and to be honest, I haven't painted anything worth mentioning, since I last posted here. That means, I needed to make sure I painted something that I knew I could finish and Grymn were my very first thought.

Being obsessed... I simply went to my storage boxes, found the one with all my spare Grymn in and selected a small group of troops and a few characters to join them. I decided that this would be a good opportunity to try out some crackle paint on the bases as well so after cleaning, basing and priming, I got to painting the troops.

The paint scheme was geared around the idea of a Terra-formed Martian environment and the troops turned out like this:

As I mentioned earlier, there are some characters to come and maybe a few more troops.

Hopefully, the painting muse stays with me.
Posted by Inso at 20:47 No comments:

It's time for a Christmas parade.

Seeing as I haven't put a full army pic of my Tunnel Fighters up here, now is as good a time as any. The one remaining vehicle to be finished is the command vehicle (which is the white one in the picture) and once that one is done, the army will be complete: 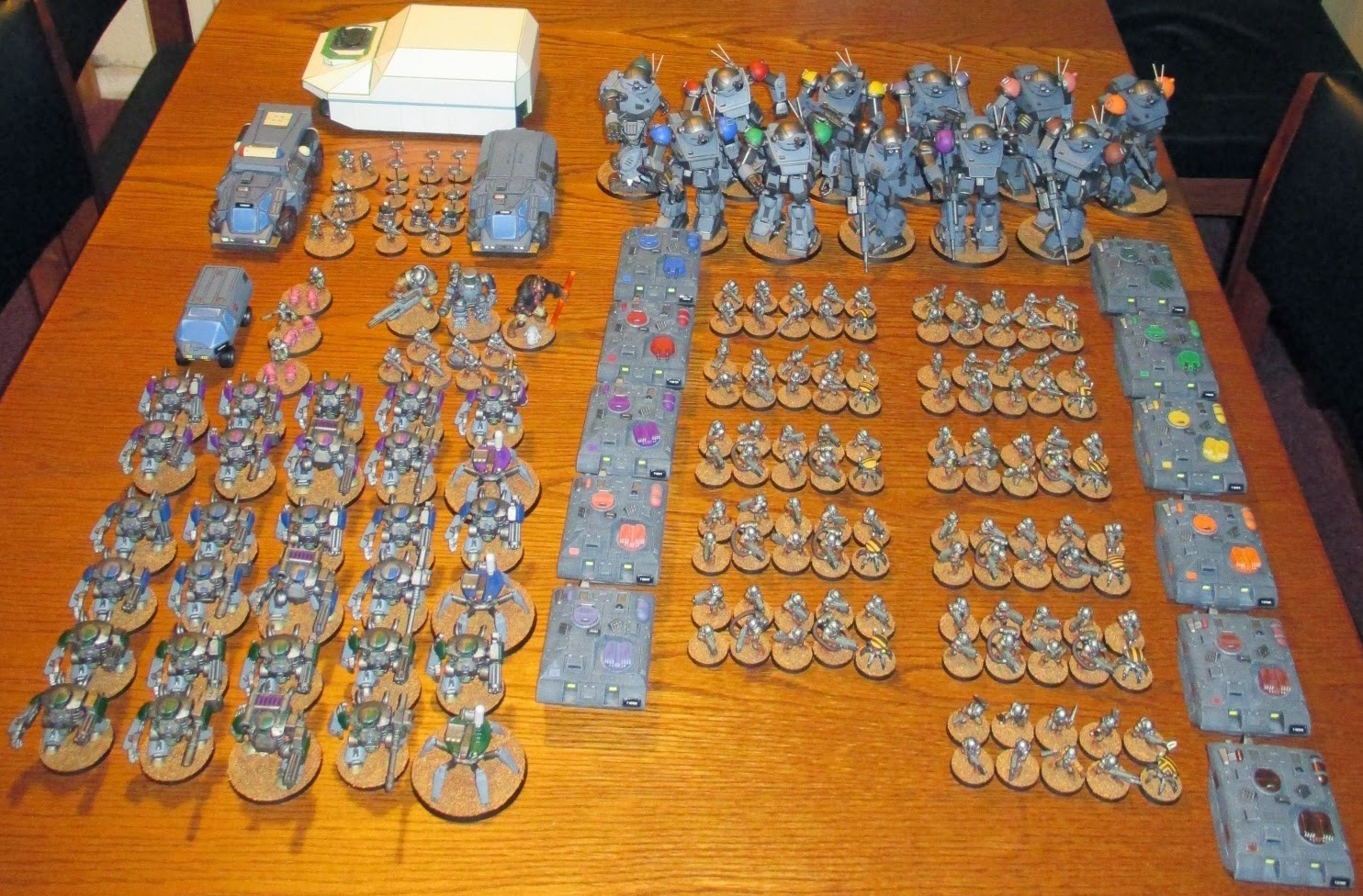 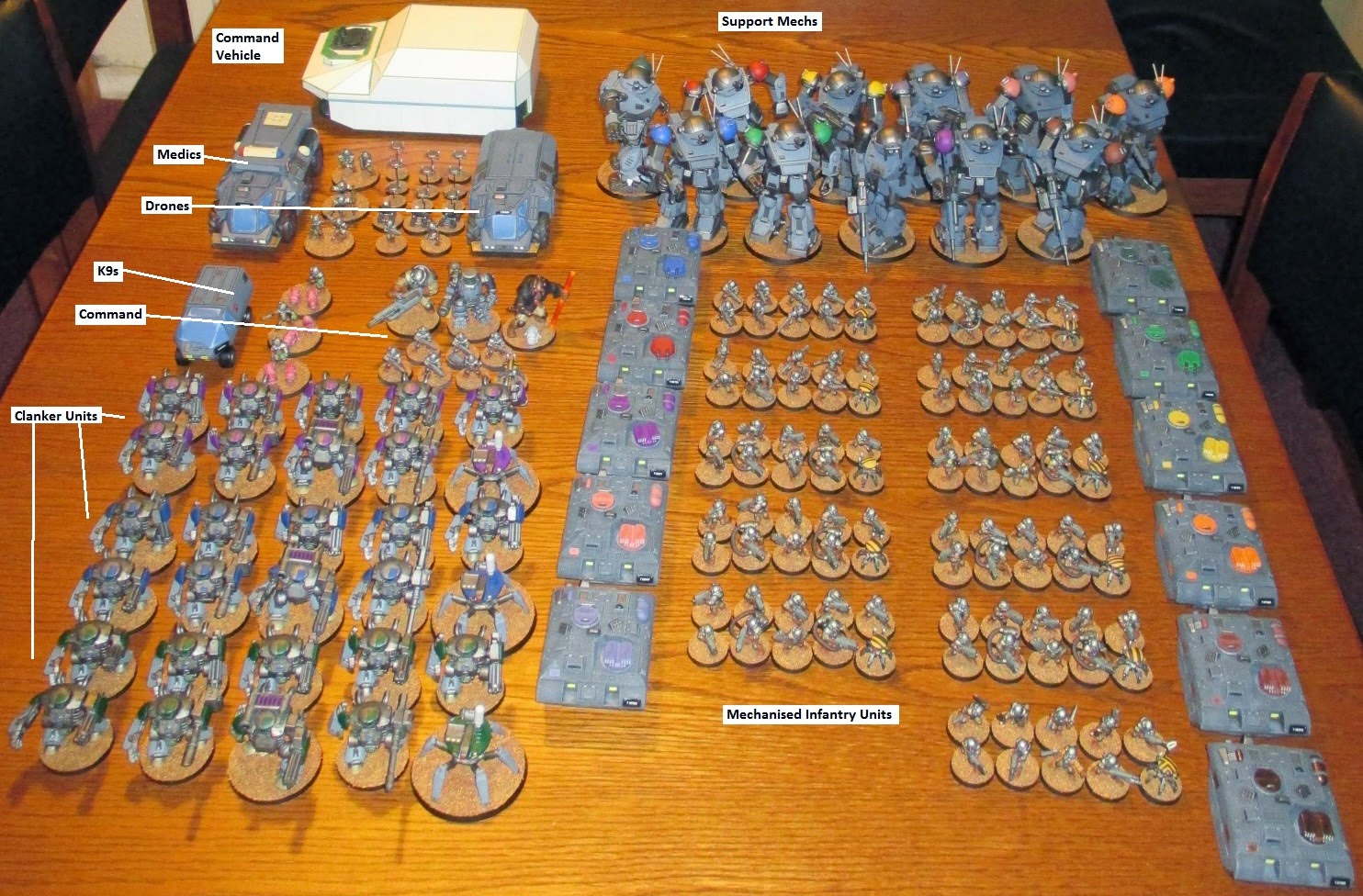 It's taken over four years to get this far and each and every unit has a host of conversions so it is completely unique.
Posted by Inso at 16:57 No comments:

It's time for an Easter parade.

Over the last few months, I have been dilligently ticking along with some Grymn projects while getting distracted along the way. Fortunately, I can now show off some of my finished Grymn. Here is a powered armour platoon for the Grmn NMA:

As you can see, there are 28 troops with the command squad at the front and three squads of 8 troops behind them. Each squad has two fireteams of four troops which have black numbers for 'alpha' and white for 'delta' teams. These particular ones are from the 4th Platoon and are part of the 1st mechanised infantry regiment. At the moment, I don't have any transport for them but I am sure that when I see the vehicles, they will turn up here.

Once I had finished these, I decided I needed to update the Grymn NMA regiment information: 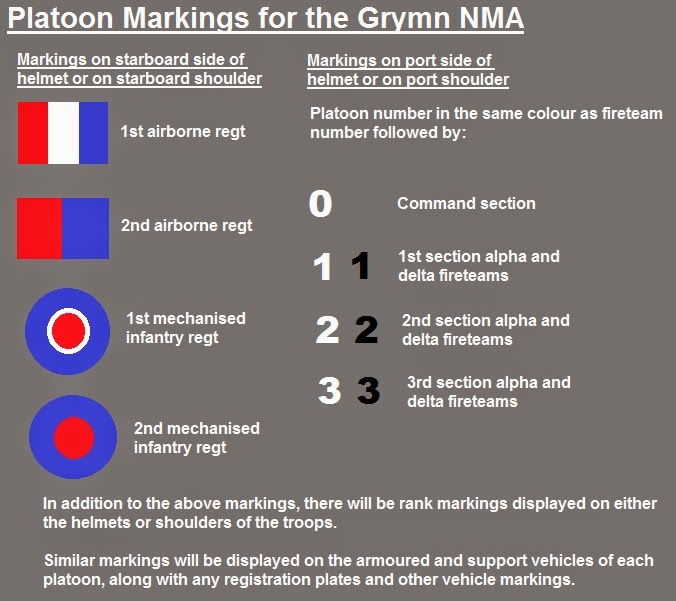 While I was in the mood to take pix of lots of troops, I thought I would get a pic of where the army sits at the moment... so here is a group pic of all of the complete elements of the Grymn NMA: 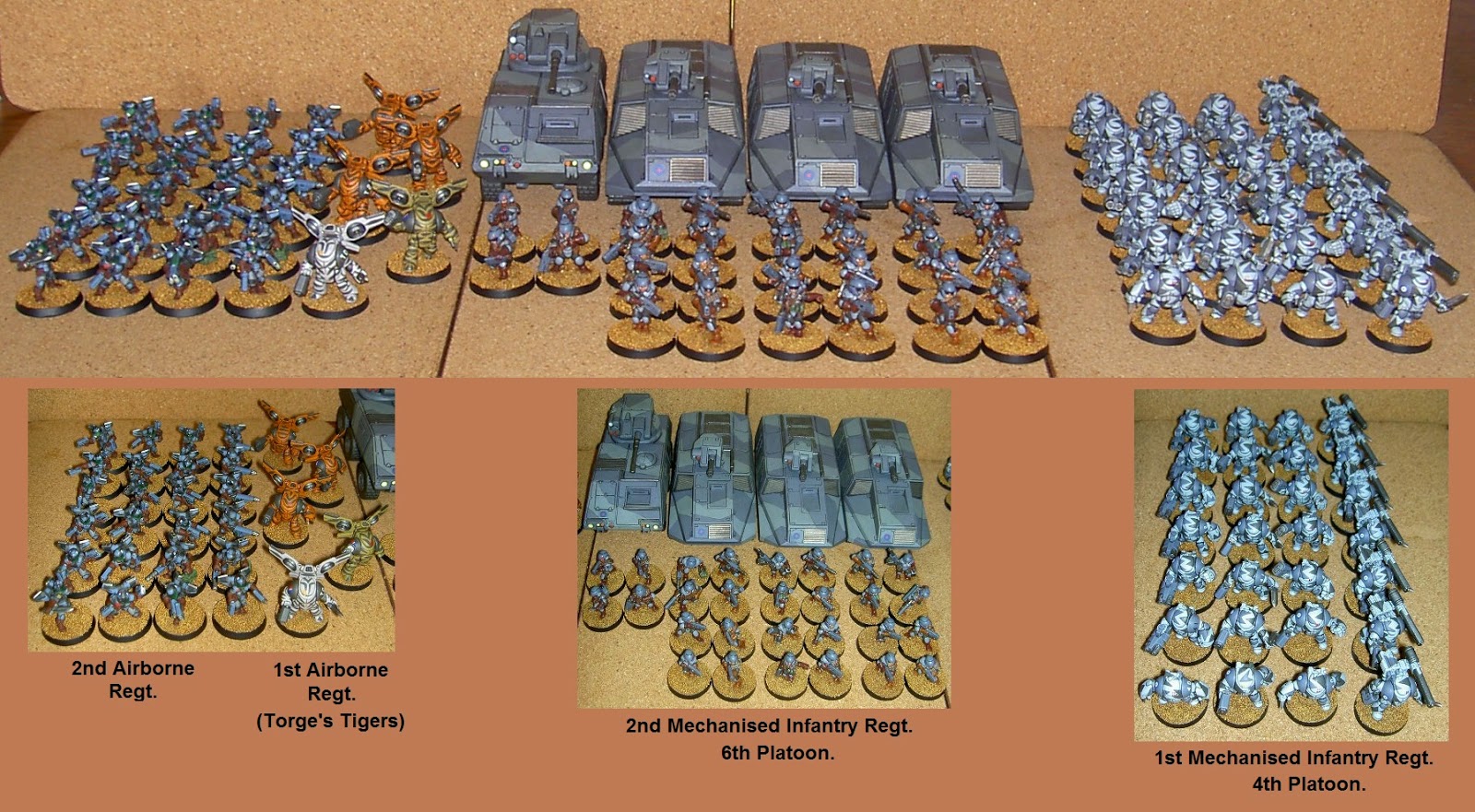 I still have a long way to go but so far, it is going nicely. I think that the next batch will be the second standard infantry platoon (8th platoon) because they are in the trays ready for paint and I also have the vehicles for them. However... a plan never survives contact with the enemy and all that!

After seeing some excellent jump-packs over at Puppetswar Miniatures, I decided that I would add them to some Grymn wearing powered armour.

Here they are in their primed condition:

And here they are once they have had their stripes added; Torge's Tigers: 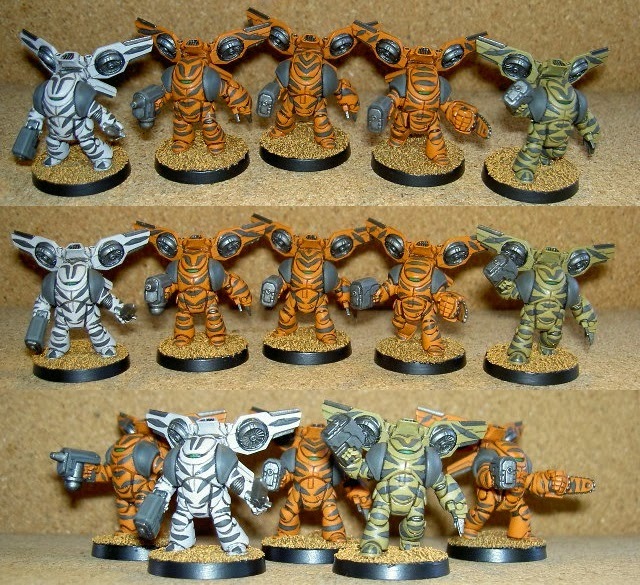 I think that the jump-packs work perfectly and actually look like they have the oomph to lift the extra weight of the armour.
Posted by Inso at 16:34 No comments:

It is time to blow the dust off again and make some noise about some new support options for the Grymn. The newest releases from Hasslefree miniatures include two sprues of options for the Powered Armour troopers.

First up, we have a back-pack that has a rail rifle and small rocket pod on it:

Next we have a special little sprue that replaces the Powered Armour arms with mechanical versions. This is designed to turn your Grymn Powered Armour into a mecha for 15mm, 10mm or 6mm games:

Both of these sprues have been designed and originally printed by John Bear Ross and cast up by Hasslefree Miniatures for sale. John has been creating miniatures using 3d programmes for many years and has worked for many companies and this little project was an excellent collaboration... I sincerely hope to see more in the future (especially seeing as the shoulders have a socket for any number of weapon options).

So now I've mentioned powered armour, I'd best show some off: 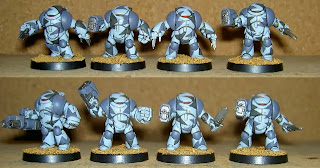 The ones above are the first two fire-teams for my Urban Army platoon. The one below is a demonstration of the new components that I have linked to above: 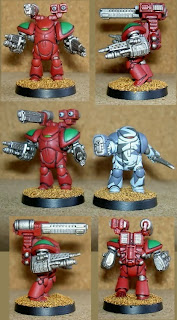 It is a good start to the new year. Hopefully, Kev will get the resin special forces Grymn cast in metal soon... and maybe sculpt a few others to go with him.

Recently, Kev over at HF has been working on the Grymn Walker again. He has decided that having arms was a good idea so here are a few pix of the WIP: 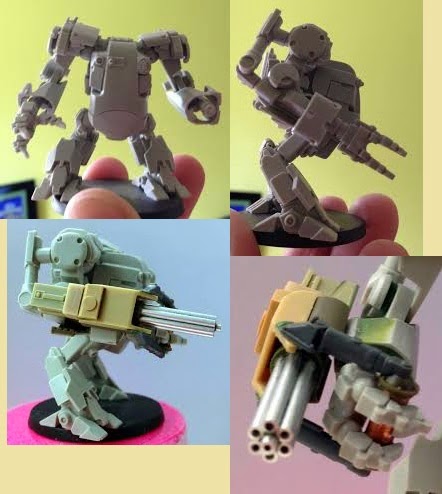 They look rather nice, don't they? The arms should be sprued up by now and on their way to Grey Matter to be cast. Hopefully these will be in the Hasslefree shop soon.

In other Grymn news, there has been a modern-day Grymn spotted:

Another great addition to the range; hopefully to be joined by a few more in the near future. Only time will tell!

Finally, work has been going on in the background to finish the Tunnel Fighter army. Just one more vehicle remains to be finished and then, after a few number plates have been added and the varnish applied, the army will be complete. Once that happens there will be some army pix and some close ups etc.
Posted by Inso at 13:54 No comments:

It has been a long wait but the new powered armour is now available in the Hasslefree Miniatures store: 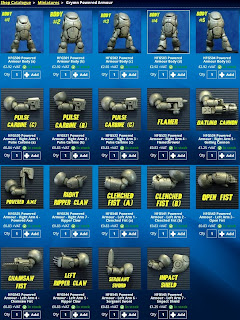 As you can see from the image above (click it to enlarge) the bodies and arms are being sold separately so you can choose to arm your troops in whatever combination you want. Just remember to buy the correct amount of right and left arms for your troops... you wouldn't want to be left short!

Here is the LINK to the shop.

As you will have realised, I am very happy about this and have already placed an order so expect to see a few more urban troops in powered armour very soon.
Posted by Inso at 09:14 4 comments:

Links to sites of interest.